What’s the only way to settle a score of Audi vs Audi?  I guess you’ll just have to watch these two RS4’s and find out.

…man, what I would give to have this in traffic sometimes.

Friday Fun – Ever Wonder how a Differential Works?

What can you say? Ken Block, Gymkhana and Hooning just never gets old. This time, they take to the streets of San Francisco reminiscent of the “Escape from…” series from years ago – except this time, it’s legal.

I have been informed that the Ken Block RC Car from last week just isn’t gonna cut it for the big Hoonigans.

The big boys need to play with big toys.. and in the world of RC cars, there’s none bigger than the Traxxas XO-1. “What’s the big deal about this RC car” you say? How about the fact that it hits 100 MPH. Yeah, one-zero-zero, miles-per-hour.

Powered by a ‘Big Block’ brushless motor, two 3S 5000mAh LiPo batteries and an AWD system; the Traxxas XO-1 will hit 0-60 in 2.3 seconds and continue on to 100MPH in a mere 4.92 seconds. Advanced control is provided with a remote that interfaces with your iPhone (or iPod touch) to feedback speed, RPMs, temperature and even telemetry information ensuring you have the fastest and most advanced RC car on the market.

Want more? Check out the video:

Santa – are you reading this???

The BBC has just released a new Facebook app that allows you to watch full length episodes of Top Gear in your browser. Legally. 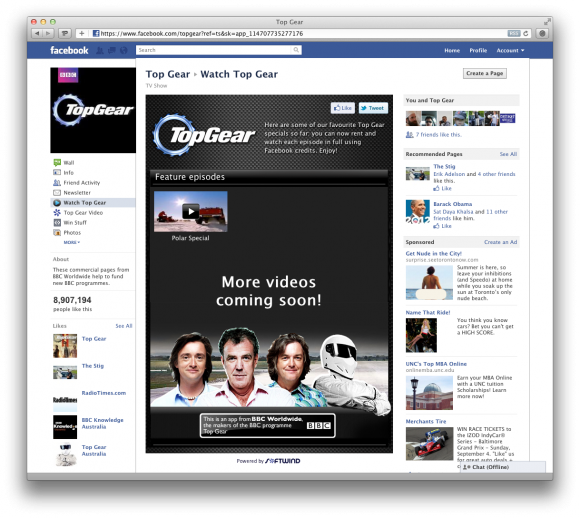 The Polar Special was the only episode available when I looked, but apparently more videos are coming soon. I wonder if they will add the Tesla episode?

Source: The Next Web.