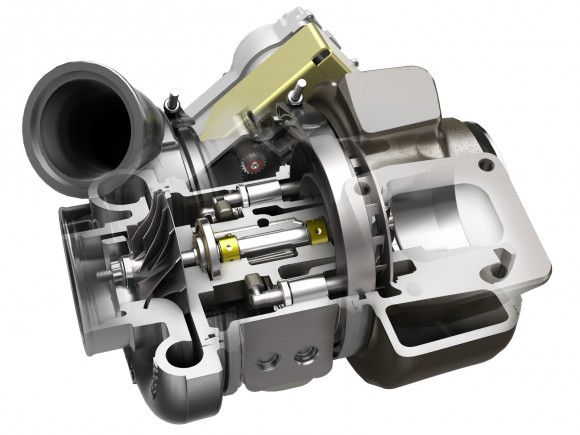 “The market for turbo chargers in small engines is about to heat up. If Honeywell is to be believed the global market will grow from 17 million new turbo vehicles in 2009 to 35 million in 2015, while the U.S. market will see growth from 5% to 20% of the internal combustion engine market. With the tightening CAFE requirements and the growth in demand for smaller vehicles, these numbers are not too hard to believe. In fact, I might argue that the numbers for 2015 may be a bit on the conservative side assuming it includes diesels and Chinese manufacturers.

In many ways, turbo chargers are currently the best “off the shelf” technology available today to improve fuel economy. By reducing the size of the engine then adding a turbo to maintain vehicle performance, automakers are finding they improve vehicle fuel economy by 10% to 20% in gasoline and up to a whopping 40% in diesels. There are essentially four main competitors in the turbo market right now, Honeywell, Borgwarner, Mitsubishi, and IHI Corporation. Honeywell and Borgwarner are the dominate players in this market at the moment.

But the market for turbos appears to be headed for a shakeup. The large German auto supplier, Continental AG, is developing a turbo that they plan on offering in 2011 and have stated that they are going to aggressively pursue the turbo market with OEMs. Since purchasing Siemens VDO from Siemens AG in 2007, Continental AG has grown into a major supplier to the auto industry. Their goal is to reach 4 million turbo unit sales by 2015 (a little over 10% of the market predicted by Honeywell). They claim to already have a deal with a European OEM (they are not saying who), and since they have connection with most major automotive OEMs their goals can’t be considered too over the top.

However, since Honeywell is already supplying turbos for the Chevy Cruze Eco and Ford Ecoboost engines in the U.S. and Borgwarner is supplying turbos to BMW, VW, Ford, Nissan, and Hyundai’s diesels in Europe, Continental won’t have an easy path to market. It would not be surprising if during their bid to become a major player in the turbo market, the cost of turbo chargers in general fall (if only for a little while). In the end, assuming their product meets expectations, I expect Continental will be successful in becoming a major player in the turbo market.

With government pressure on to increase fuel economy and consumers still feeling the pinch of the recession in both here and Europe, auto makers are on the hunt for new solutions to improve fuel economy without substantial added cost to the vehicle. New technology such as dual spark and lighter weight materials will help, but it’s likely that technology like turbo chargers will provide a lot of bang for the buck without having a substantial impact on either consumer wallets or behavior.”

So what does all this mean for after-market guys? Well in my opinion you will see pricing come down due to the increased competition and production as well as the technology go up. What do you guys think?